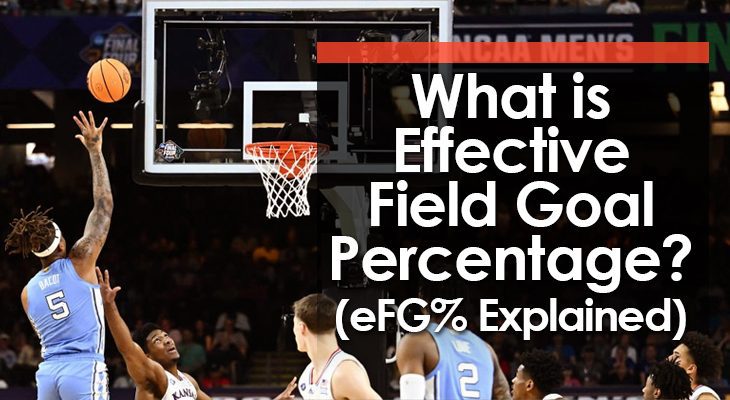 Over the last few decades, basketball statistics and analysis has moved forwards by leaps and bounds, altering how people watch, play, and evaluate the game.

Nothing has had a bigger impact on the game than the explosion of three point shooting which has grown exponentially over time.

And with that, we’re looking for better ways to evaluate shooting ability.

What is Effective Field Goal Percentage?

One of the most important new statistics is effective field goal percentage.

It was first introduced in 2002 by Dean Oliver in his book, “Basketball on Paper”

Dean recognized the shortcomings of field goal percentage and proposed Effective Field Goal percentage (eFG%) — one of his “four factors” to predict a team’s success.

It’s a simple calculation that weighs the added benefit that a made three pointer has, allowing for more accurate evaluation of both teams and individual players.

This had made some “traditional” statistics like field goal percentage somewhat antiquated.

Why Is It Important?

Regular field goal percentage, much like batting average in baseball, doesn’t do a great job of fully explaining a player’s offensive contribution.

Effective field goal percentage does a better job because it:

Effective field goal percentage is the most heavily weighted of the Four Factors at 40%.

Both play the (3) and would be considered the “go-to guy” on the offensive end.

Putting aside factors like usage rate, it seems Player B is the better offensive player, right?

But let’s look at their eFG%…

Player B is the midrange master DeMar DeRozan of the Chicago Bulls.

DeMar Derozan makes his living between the paint and three point line. But while he’s an excellent midrange shooter, his shot profile requires him to make those shots at a very high rate to maintain efficiency.

But for Jayson Tatum, not only is he a solid three-point shooter (shot 35% on his threes), but he takes a huge number of them (8.6 threes a game this season).

Compare that to DeRozan who also made 35% of his threes, but took just two per game.

Tatum’s shots carry more “value,” allowing him to make up for his lower field goal percentage because the shots he makes are worth more.

Most players shoot between 40% and 50% from the field.

For the most part, we accept anything above that as “excellent” and anything below that is considered “poor” shooting.

Effective field goal percentage hasn’t received the same treatment, even as teams start to rely on it more to evaluate performance.

The statistic isn’t always readily available, although websites like teamrankings.com are a great resource for “advanced” stats.

For many NBA evaluators, an eFG% of 51% or higher is decent, while anything below 50% is subpar. 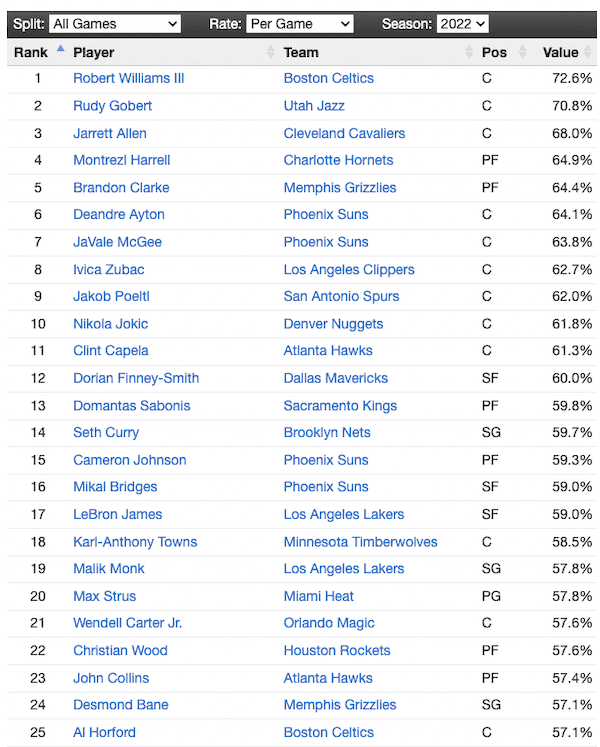 It’s interesting that eFG% should properly value the three point shot, yet the majority of players on this list are Centers and Power Forwards who make their living in the paint.

But a made shot is still the most valuable shot in basketball, regardless of whether it comes from two or three.

While there are a few sharp shooters on this list like Seth Curry and Malik Monk, many of what we view as the league’s best shooters like Steph Curry and Kyrie Irving are absent.

Which leads me to…

Knowing some of the world’s best shooters aren’t highest on the list, does that mean effective field goal percentage is a poor statistic to evaluate individual offensive performance?

But it’s important to understand the context of eFG% and implement other statistics to properly evaluate players.

No one would run out an offense of five centers simply because they were top-five in eFG%.

Many of the players in the top-25 are complementary players that are set-up by the best players on their team.

These are usually in the form of either lobs at the rim, or in the case of players like Dorian Finney-Smith and Seth Curry, wide open threes.

These players aren’t asked to finish many possessions and don’t have to create hard shots off the dribble as the shot clock ticks down.

It’s what makes players like Nikola Jokic, Giannis, and of course LeBron so valuable on offense.

They are high usage players that take a lot of difficult shots but can still convert at a rate comparable to the Rudy Goberts of the NBA who are mostly cleaning up offensive rebounds and lobs.

That, though, doesn’t diminish the value of these Centers — but it adds the necessary context for their gaudy numbers.