EAST RUTHERFORD, N.J. — The New York Giants‘ offense trotted onto the field for the first play of 11-on-11 drills at mandatory minicamp last week. Flanking quarterback Daniel Jones were wide receivers C.J. Board and David Sills V. Richie James was in the slot.

Running back Saquon Barkley was in the backfield, but the projected top three receivers — Kadarius Toney and Kenny Golladay (unspecified injuries) and Sterling Shepard (Achilles recovery) — were in red non-contact jerseys. And receiver Darius Slayton, working with the second-team offense, dropped a potential long touchdown for the second time in two weeks as his spring struggles continued.

The more things change for the Giants, who have a new head coach (Brian Daboll) and general manager (Joe Schoen), the more they stay the same. Every Giants starter at the offensive skill positions missed at least two games because of injury last season, and this spring hasn’t provided much reassurance things will change. 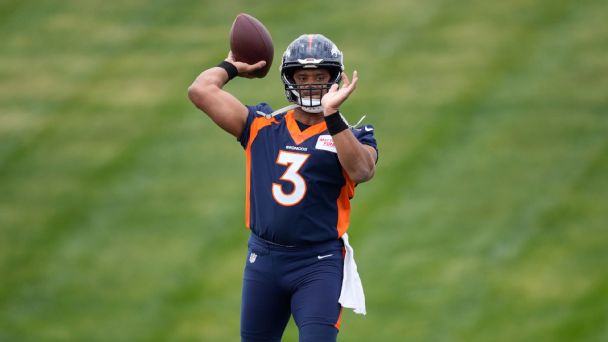 • NFL minicamp preview
• What’s next for Denver’s Surtain?
• What we learned on Brady
• Titans’ Farley ready to return

“You would love for everybody to be out here, particularly the skill guys to get reps with the quarterback, but that doesn’t happen usually in most places,” Daboll said. “There is always some guy dinged up or you’re giving them an off day. We’ll get plenty in the summer here.”

Toney, Golladay and Shepard were in attendance doing what they could during most of the voluntary offseason program. They were able to learn much of the offense even if they didn’t run any routes for Jones.

“They’ve thrown with Daniel before. They’ve done a good job,” Daboll said. “Again, you can learn different ways, and we’re just teaching them how we got to teach them right now.”

Veterans missing spring reps can be brushed off in many cases, but all three of New York’s top three receivers fit the injury-prone label.

Toney, picked No. 20 overall in the 2021 NFL draft, dealt with various injuries as a rookie — hamstring, ankle, quad and oblique among them. He also missed time because of positive COVID-19 tests and ill-fitting cleats. He appeared in 10 games, finishing with 39 catches and no touchdowns.

Golladay, who signed a four-year deal for $72 million last offseason, also was hampered by injuries (hip, hamstring and knee) that limited him to 37 receptions and no touchdowns last year. He has played 19 games over the past two seasons, totaling 57 catches for 859 receiving yards and two touchdowns.

Shepard, who ruptured his left Achilles late last season, has played in 16 games once in the past five years.

Daboll has said on multiple occasions he expects all three to be ready for training camp next month, and Golladay participated in some drills during minicamp, so there is optimism for a group that struggled badly last season.

“There’s a time to be smart and there’s a time to make sure you’re pushing through things the best you can. You have to balance those,” Daboll said. “You push guys through in training camp — maybe it’s the same exact thing and they don’t have a red jersey on. … All we’re trying to do is try to be as healthy as we can be when training camp gets here.”

Jones had his ups and downs at OTAs and minicamp while often surrounded by reserves. If that sounds familiar, it should. It continues a trend of Jones dealing with difficult circumstances, something the Giants have been desperately trying to stop.

Part of the contingency plan at receiver is rookie Wan’Dale Robinson, drafted in the second round this year. He had a strong spring that included a diving grab on a deep pass from Jones over cornerback Aaron Robinson in the back of the end zone during OTAs.

“He’s quick, he’s fast, he’s explosive,” Slayton said of the rookie. “I would say he is as advertised.”

Slayton, in the final year of his rookie contract, had 26 catches last season and led New York’s wide receivers with two touchdown receptions. He was curiously running behind the likes of Sills and Travis Toivonen at times this spring. It doesn’t bode well for his future under the new regime.

What you need to know about the New York Giants:

However, Barkley, another playmaker who had a disappointing 2021 season impacted by injuries (torn ACL in his right knee), was perhaps the biggest standout of the spring. It appears he might be used more as a receiver in the scheme run by Daboll and offensive coordinator Mike Kafka.

Barkley was used all over the field — out wide, in the slot, in motion, out of the backfield — throughout OTAs and minicamp.

“It’s helpful, not only for myself but opening up other things for the offense,” he said. “[I] haven’t really moved like this since college. Kind of went back and watched a little bit of my college stuff to see stuff that I was able to do there and transition.”

The No. 2 overall pick from 2018 looks healthy and explosive after missing at least three games in each of the past three seasons.

“He’s frickin’ huge. He’s over here squatting what linemen are squatting, and one day he was yelling about [Cleveland Browns running back] Nick Chubb putting his squat video up. He’s like, ‘I got to beat that [675 pounds],'” center Jon Feliciano said of Barkley. “It’s good to see … him having the motivation, him not staying stagnant and being a great player that he is.”

If the spring foreshadows anything about the coming season, it could be a big one for Barkley. The future is cloudier for the Giants’ other playmakers.